How Can You Tell If a Medal Is Really Vintage?

Good question!  I've been fooled a few times, but now that I've been selling vintage religious medals for a few years, I think I'm wise to the ways of telling if a medal is old or not.  Please keep in mind that there are ALWAYS exceptions to everything I'm going to say here!  I've found some beautiful vintage medals that are in mint condition and I've found some new medals that look like they've been through the wringer.  These are just some basic guidelines that I use when looking for vintage religious medals....

Patina
The first thing to look at is the patina.  Is it tarnished? Not necessarily black, but does it look like the surface patina has built up over time?  A true old patina will be darker in the crevices and low spots on the medal than it is on the high spots.  The words and image on the medal will be lighter than the background because they have been rubbed clean by being touched, while tarnish has been building up in the lower areas without being disturbed. 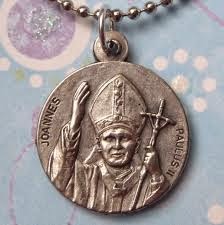 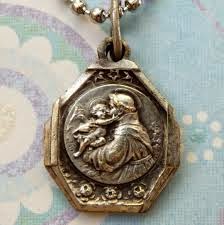 This newer medal of Pope John Paul II shows the typical lack of patina found on newer medals.  No place is really darker than the other.  On the St Anthony medal, there is a patina around the figure that gently blends into the background.  This type of delicate patina is very hard to duplicate and is typically found in older medals.  A patina that has been added to make a medal look old tends to have sharper edges and the raised areals will be shiny where the added patina has been rubbed off.  You hardly ever see this, but it could happen. 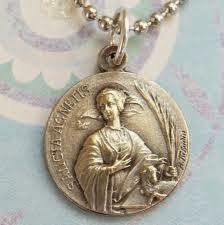 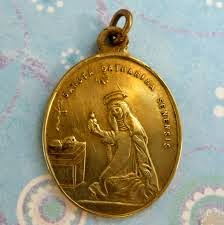 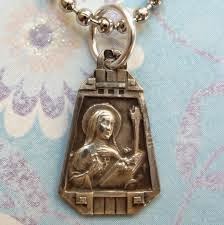 Look at St Catherine of Siena above on the left, now look at St Agnes above on the right.  Big difference, yes?  St Catherine is depicted in a simpler style and the medal is much thinner.  St Agnes is dramatic and detailed and the medal is thicker.  And on the immediate left is St Rita done in art deco style which can be recognized by its repeated geometric shapes and patterns.
Wear
Is the image crisp and clear or has it been smoothed over time?  An old medal that has been worn will usually have the fine detail rubbed smooth from being handled by previous owners.  If it's silver plate, the brass colored base metal might show through the worn places.  This is not always the case, and there are ways of casting new medals from molds made with vintage medals, but it's usually a good sign to show that a medal is old. 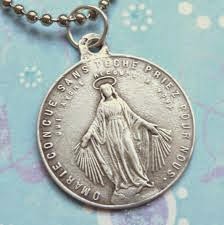 The image of the Virgin Mary from this 19th century Miraculous Medal has had the detail rubbed off over time.  This softened effect really adds to the beauty of vintage medals.

Image on both sides?
Is there an image on both the front of the medal and the back?  Newer medals almost always only have an image on the front and a smooth or slightly textured surface on the back.  Many (but not all!) vintage medals have images on both sides.  If the medal shows a saint who was a martyr, the reverse might show a palm branch.  If it shows a saint who was known for purity, there may be a spray of lilies on the back.  Often there will be saints who are connected in some way on both sides.  St John Vianey usually has St Philomena on the reverse because he had a special devotion to St Philomena during his lifetime.  St Francis of Assisi will frequently have St Clare on the reverse because they were good friends, and St Clare started a community based on St Francis's religious order.

Shape
What is the shape of the medal?  I frequently see oval, base-metal medals of saints being sold as "vintage".  And yes, they might be old, but they're not really collectible or considered vintage because they can still be purchased at lots of places today.  As my grandmother would say "They're a dime a dozen!"
Vintage medals are frequently circular or oval, but also can have delicate lace-like edges, figural depictions, and other unusual shapes.  The rarity of the shape makes it more likely to be a vintage medal.


From whom are you buying?
Is it someone who has experience in exonumia?  (I'm showing off my vocabulary - exonumia is "numismatic items that that are not coins or paper money."  Things like medals, tokens, tags, or badges) (OK, what is a "numismatics"? Numismatics is the study or collection of currency - both coins and paper money.)
What was I saying? Oh, whom are you buying from... If you're buying from the sweet nun who's selling her old, tarnished, and unusual religious medals to raise money for charity, it's a pretty good bet that they're vintage.  You know that medal's "provenance" - where it came from and who owned it - it's story.  If you're buying from "Crazy Joe's Exonumia" on Ebay - well, I'd take a good look at the photo before I bid.  It might be vintage - it might not.

I really don't think many people out there purposely try to pass off new medals for vintage.  But I know that there are a lot of people out there who think that they have vintage medals but really don't.  It's an honest mistake, and I'm hoping this post will help people know what they really have.

I'm sure that once I post this, I'll think of a couple of other clues that I use to figure out the age of a medal, but this is a good start for any medal collector.  Please let me know if you have any questions of suggestions about dating vintage medals.  Everyone loves to learn more!

Email ThisBlogThis!Share to TwitterShare to FacebookShare to Pinterest
Labels: How to tell if a medal is vintage.

Be nice! Remember, God is watching!